The Phases of The Moon 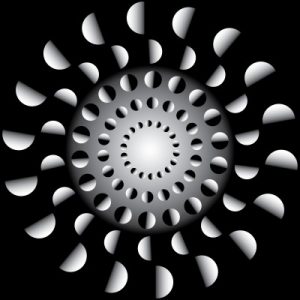 New Moon ~ the New Moon is the beginning and the end.

It is the phase in birth where there is still darkness and the seed of life, consciousness, inspiration, or an idea is in and about to come through the dark incubation period. It is manifested energy but not yet in the fullness of the form it will become.  It is brewing hidden within the environment which originated it waiting for the proper nourishment to support it.  In this seed state of consciousness much of what will come into life is still hidden. It is when there is so much unseen creative potential happening (like the fetus in the womb), yet it is not yet fully exposed (like it will be in the Light of the Full Moon phase) .

The New Moon is a period of time when we have an important idea, an inspiration, an opening, a breakthrough, yet the question most lurking is “for what will it become and where will it go?”

There are the days leading up to the New Moon which is the phrasal period of release and letting go of the entire prior cycle of the past 4 weeks. In this ending period we are being asked to clear and make space for New Life which is wanting to come through.  It is essential that we prepare and nourish the womb of our creative potential so that what we birth into our lives will come through a healthy environment of loving intention serving all of life’s creation. Like anything created it is dependent and a product of each and every ingredient that has influenced it.

This is a most optimal time to focus on clearing space and letting go of what we no longer wish to carry forth into the new cycle.  What does remain to carry on will serve to condition and enrich or deplete the very soil by which the seed will grow from, in the same way that too little or too much water or sun will strongly influence the growth of the seed and will eventually be recognizable in the fruition phase (the Full Moon.)

This is the stage where we see the first “half Moon” since the New Moon.  It is the mid-point between the New and the Full Moon.  Symbolically it represents a “cross-roads” point or a stage in which adjustment and assessment of the original intention seeded at the New Moon needs to be addressed.  It is known as the “Crisis in Action” stage where we must take note to what the efforts of the past week have brought forth and what we must do in order to bring in the bounty of fruition at the Full Moon in one weeks time.  No matter what on the Full Moon we will see in form the good’ole adage ~ “we reap what we sew”.  Full Moons illuminate, often with emotional intensity, the efforts of the garden of our own lives.  It can be a reflection of great beauty or at times great scarcity…

The first quarter moon is the time to take action to adjust what we have done or what needs to be done in going forward with the original intention from the New Moon.

Full Moon ~The Full Moon is a time when the Sun and Moon align in opposition to each other.

It is a period of magnified power and intensity which becomes evident in its effect upon nature; people, animals, the tides, etc.  It is a time of Light illuminated into the Darkness.  It is like a window which can serve us to peer into the emotional depth of what may otherwise remain hidden or buried beneath the surface (or busyness) of our lives or within the unconscious of our psyches, opening us to deeper personal connection.   Like a great wind of emotion blowing open the windows or doorways allowing what was behind the closed passages to come out and play or in some cases taunt and haunt us.  Always however, showing us what was always there influencing us behind the curtain.

It is the peak period, where the energy that has been growing forth in a great surge of inspiration, manifestation, and power from the initial birth of the New Moon comes to its full potential and reflects with great presence what is to be seen.

From this point forward over the next two weeks the Light will begin to fade and we will be called again into the adjustment and letting go phase, ever continuing on this great spiraling and circle of Life ~ birth, growth, maturation and death.  The Lunar Cycle represents the constant cycle of Renewal and the evolution of Consciousness from out of the darkness into light and then the return  to the dark.

This is the “half-moon” phase after the Full Moon.  It is the mid-point from the Full Moon to the New Moon.  This phase is known as the “crisis in consciousness” where we are being called to adjust our perspective and view of what has come into fruition and what now needs to be released from our focused efforts and intentions.  It is here that we must face what has not “worked” or benefited the “project of our creation” or what is no longer useful to put energy into.

In this phase we are coming to the end of the cycle before the New Cycle yet again emerges.  It is a time to begin to prepare once again to till the garden and create the fertile bed for the new seed life to be welcomed and nourished.

We are each the creative wombs of Life birthing this world garden into existence.